For the first 15 years it ran between Howth and Bray, and then a branch was added at Howth Junction and Donaghmede so that some darts could go to Malahide instead of Howth.

There is talk now of extending the Malahide Dart line all the way to Balbriggan by 2022.

I imagine the people living in Howth and Sutton were worried which the Malahide line was opened that half of the northbound Darts would be diverted to Malahide instead. But the strange thing is that, even after all of these years, this has never happened.

I regularly arrive in a Dart station to see that the next two Darts are going to Howth and the one after that will be going to Malahide.

All I can conclude is that there is a very powerful politician living in Howth.

Here is a picture from one of my favourite apps (“Next Train Ireland”) showing not 2 but 3 Howth Darts between 2 Malahide Darts: 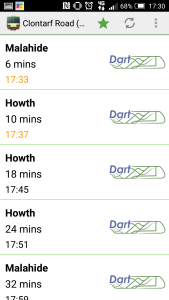 How many syllables are there in the word “medicine”?

I heard a number of people on RTE radio recently (including Marion Finucane and a guest) pronounce the word “medicine” as if it had 2 syllables: med-sin.

For me, the word has always had 3 syllables: meh-de-sin.

Interestingly also, the two languages agree that the word “medicinal” has 4 syllables, i.e. both are based on the 3 syllable version of “medicine”. So there is no word pronounced med-sin-al. I’m sure a linguist would find lots of examples to show that my reasoning is invalid, but, to my way of thinking, this undermines the validity of the 2 syllable version.

I mentioned time travel movies in a recent post and I can’t leave the subject without mentioning the move Predestination which I watched recently.

The movie stars Ethan Hawke as a time travelling “Temporal Agent”. Apparently the story is based on Robert A. Heinlein’s story “All You Zombies”.

The movie scores 7.4 on IMDB and some of the reviews are very enthusiastic.

I didn’t enjoy the movie. I don’t know what happened in Heinlein’s story, but for me this is the movie someone made who wanted to construct a set of circumstances involving time travel and sex change so that somebody could give birth to himself/herself. An interesting idea, but not a good basis for a full movie IMHO. And some of the things which needed to take place to make this possible were just too ridiculous, I’m afraid. 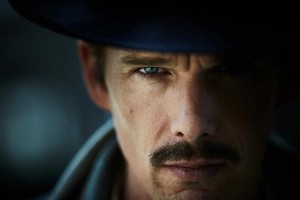 Song of the Summer

The song of the summer for me was “Madre Tierra (Oye)” by Chayanne.

The only reason I came across this song was because they played it all the time when we were on holidays in Spain. The “animation” team had a set of dance moves to go along with it which the adults and kids could do along with them.

We bought the CD and we (well especially me) have been listening to it a lot over the past few days.

You can see and hear the song here:

Here are the stats according to IMDB:

I have read some reviews which blame:

For me the problem is the choice of the terminator.

The step up in the terminator between T1 (the T-800) and T2 (the T-1000) was obvious. That made perfect sense. Then they seemed to struggle to know how to step things up for T3.

I saw an interview with Arnie at the time of T3 and he was praising the idea that the terminator would be a woman! What a ridiculous idea! Even the name T-X is stupid.

I don’t remember much about T4 – a bit of an indictment in itself! So I don’t really know what the premise was.

But in the new movie they decided that the terminator would be John Connor. Not a terminator who looks like John Connor, but John Connor himself. The problem with that is that it’s an obnoxious idea. I hated it. My 10 year old son hated it.

They say in the Hollywood Reporter that the movies poor performance at the box-office may have killed plans for 2 more movies. I think that is probably for the best. They seem to have no idea how to move things forward from the first two movies.

Having said that, I just read on IMDB that the rights to the terminator series revert to James Cameron in 2019. So maybe there is still some hope.

Here ‘s a picture of Emilia (one of the Sarah Connors) and Arnie (one of the T-800s). Ain’t time travel (and sequels) confusing! 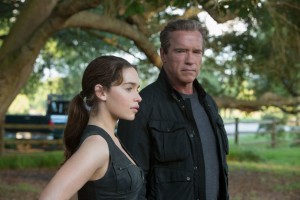