In my last post, I mentioned a small mistake made by Apple/Steve Jobs.

Here is a much bigger one, and one which has never been rectified properly.

The reason I don’t have an iPhone, and don’t ever plan to but one, is that it is too “closed”.

App Inventor is not available for iOS because Apple (and I believe this to be a Steve Job legacy) doesn’t want people developing code any way but the “right” way. And the right way involves Xcode, Objective-C or Swift, a Mac, possibly other tools, and registering as (and paying to be) an iOS Developer. And for the longest time they didn’t want you to do any kind of coding on an iPhone/iPad (this restriction has been eased more recently with things like Codea, ScratchJr, Pyonkee and “Swift Playgrounds“).

I mentioned this restriction previously in my old blog when I spoke about “Cargo-Bot“.

So until this is addressed, I’ll be sticking with Android.

Here is another (very small) mistake which Jobs made: He thought a mouse should have one button (so as not to confuse users, apparently). He did not want users to have to “right click”.

So Lisa, IIGS, Mac, etc. all came out with a single button.

To me, this was just wrong.

Over time, Windows mice had two or three buttons and maybe a “wheel”. This obviously gives the user more power.

And then he endorsed the idea of a mouse with no buttons! This article claims that this came about through a misunderstanding.

I guess the problem was addressed eventuality with the multi-touch “magic mouse”. But I don’t know for sure as I have never used one.

Here is a picture of original Macintosh mice: 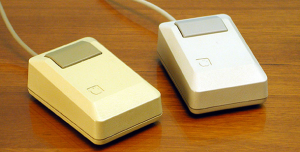 I mentioned the Apple IIGS in my last post.

I came across an interesting video on YouTube entitled “Apple and Steve Jobs’ Biggest Mistakes Ep 1 – The Macintosh”.

This interesting video claims that the original Mac was a mistake. I don’t think anyone would disagree with that. The YouTuber (“The 8-Bit Guy“) goes on to make a compelling argument that Apple should have promoted the Apple IIGS and dropped the Mac.

And the amazing (and cool) thing about the IIGS was that it was able to run most of the Apple II software. So there were hundreds upon hundreds of software products available for it! (Compare this with the Mac which suffered from a horrible lack of software).

He argues (and I agree) that Apple should have been pushing the IIGS rather than the Mac (he blames Steve Jobs for this decision which, based on everything we know about how Jobs was behaving at that time, seems reasonable). But instead they reduced the CPU speed of the IIGS on purpose to make sure that GUI (which was very similar to the Mac’s but in colour!) was sluggish and unable to match the Mac!

Wikipedia tells us that ” The machine outsold all other Apple products, including the Macintosh, during its first year in production”.

We are left to wonder how things would have turned out if Apple had not crippled the machine and has pushed it instead of the Mac. They might have been able to avoid all of those years in the wilderness. Maybe it could even have given the IBM PC a run for its money! Imagine if we were all running machines now which were descended from the Apple II rather than from the IBM PC!

The video includes “Ep 1” in the title and “The 8-Bit Guy” says that he plans to talk about other mistakes which Jobs made but I can’t see any sign of such videos.

You can see the video here:

In my last post, I spoke of my admiration for a man who build a computer because he did both the hardware and the software.

I cannot leave this without mentioning my undying admiration for Steve Wozniak.

“Woz” designed and built both the Apple I and the Apple II (the first computer I every owned). As if that wasn’t enough, when you look at the “Apple II Reference Manual”, you can see from the listings that he also wrote the following programs in assembler:

He also wrote some of the BASIC games such as Breakout (which he didn’t put his name on) and Mastermind (which he did).

He went on, of course, to design printer interfaces, serial interfaces, the floppy drive and later contributed to the Apple IIGS.

I found his book iWoz in the local library some time ago. It is a very enjoyable read. I found myself very jealous of the place and time where he grew up.

There are lots of views featuring Woz in YouTube. Here is his appearance on Conan in 2016:

Building a REAL Computer from Scratch

In my last blog I spoke of my admiration for a man who built a simple working computer using TTL chips. This computer is fantastic for teaching/learning how computers work.

Imagine, therefore, my admiration for a man who built a REAL computer using TTL chips. By “real”, I mean that it:

The creator, Bill Buzbee, is a genius. He did both the hardware AND the software. He says that he did it because he wanted to learn more about hardware. He certainly did that, including learning how to “wire wrap”.

Bill had to do EVERYTHING – even creating his own instruction set! It’s an amazing accomplishment.

Only one user can Telnet onto the computer at a time, but I managed to do so the other day. It’s incredible to think that that I was running a game on a computer which someone has built and programmed all on his own!

And here is a link to his YouTube channel.

And here is a long (almost an hour) video where Bill explains everything about the computer, which he calls “Magic-1”:

Building a Computer from Scratch

One such guy is Ben Eater.

He has a series of videos on YouTube which show how to build an 8-bit computer on breadboards using TTL logic! The videos cover everything from building the clock, to registers, to the Program Counter, to RAM, to the ALU, etc.

It is really cool and he explains it all very clearly. So if you want to understand how computers work at a very low level, I can’t think of a better resource.

He also has videos which explain lower-level concepts, such as how diodes and transistors work, and how they can be used to build “gates”, etc. work. He explains everything very slowly and calmly. Here is a link to his video on “How Semiconductors Work“. I can honestly say that nothing has helped me to understand this topic as well as this video did.

My hat is off to you, Mr Eater!

And here is a video where the man himself is interviewed:

I mentioned in my old blog how taken I was by a very simple microprocessor-based microcomputer called the Cosmac ELF, dating back to 1976.

The microprocessor in question was the RCA 1802.

The microcomputer was really just for learning about computers. You could enter short programs via switches and then run them. To blink LEDs or whatever.

I have been thinking about this again recently and I have been amazed how much interesting stuff there is about this device on YouTube.

Here are some short videos showing people using their ELFs:

Entering a short program with commentary by DevilishDesign

Entering a short program by hvman

The ELF in this short video has some enhancements including the video interface from a subsequent “Popular Electronics” magazine:

With a display by Les Wright

Then this is this long (46 mins!) video by youtuuba where he discusses exactly how he built his ELF:

Where does the time go…

I can’t believe that it’s near the end of April and this is only my fourth blog post on 2017!

Where does the time go?!

I guess I must be busy…

And the weird thing is that I have a big backlog of things that I want to blog about. They are all floating around in my mind (and in my To Do list!)

So this short post is to help to break the logjam.