I have just finished re-reading Shibumi (my favourite book) for the umpteenth time.  Still a great pleasure.

And now I have started to re-read Don Winslow’s book about Nicholai Hel called Satori.

This is my first time re-reading this since it came out in 2011.

I was very excited to read it at the time. A new story about Nicholai Hel (and some familiar characters from the original book). And an endorsement from Rodney Whitaker’s daughter Alexandra on the Trevanian website.

At the time I didn’t enjoy it to be honest. I didn’t recognise Winslow’s Hel to be the same person as Whitaker’s. I note that Whitaker had two conditions for the idea of another author writing about Hel:

Anyway, I’m not that far into the book but I spotted a glaring error on the second page!

Winslow says that Hel killed his father-figure Kishikawa with “a single finger-thrust to the trachea”. Anyone who read Shibumi know that he killed him with a pencil (naked/kill is not about killing with no weapon, it’s about being able to use anything as a weapon).

How could anyone make such a mistake about a well known detail, and then hope to re-create the character of Hel?!

Anyway, I am reading the book and (in spite of what I have said above) trying to do so with an open mind.

By the way, while I’m writing about Trevanian once again, I should mention the sad update that:

In a recent post, I listed a few upcoming movies which I am tracking/looking forward to.

One of these is the movie version of the novel Satori, which was written by Don Winslow, based on the novel Shibumi by Trevanian.

I just spotted in the Trevanian Facebook page, that there was an announcement on 3rd June 2013 that:

incident at 20-mile movie deal signed. Small independent. We shall see what we shall see.

So there is another possible movie to add to the watch list.

BTW: I notice that Alexandra Whitaker’s website is not available at the moment. I hope that will be rectified soon.

The BBC reports that a new Sherlock Holmes story penned by none other than Sir Arthur Conan Doyle has been uncovered, “more than a hundred years after it was first published”.

As a huge fan of these stories I must confess to being very excited when I read this.

I read all of the books in my youth, and I listened to all of the stories again quite recently.

I am also a fan of the two movies with Robert Downey Junior (there is speculation on IMDB that a third movie is on the way). And more recently I have very much enjoyed the TV series with Benedict Cumberbatch (huge fan of his also).

And I mentioned in my previous blog how much I liked the TV series “House M.D.” which was based to some extent on the Holmes concept.

To return to the newly discovered story: 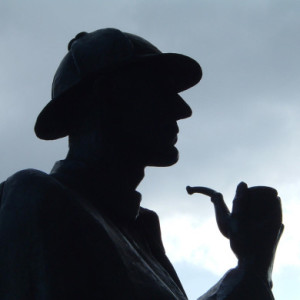