A company called “Boston Dynamics” has built a very impressive robot called “Atlas” and has made the following video to demonstrate some of its capabilities:

Then some genius came along and added a new soundtrack to make this completely hilarious video. Funniest thing I have seen in ages. Enjoy!

in 1973 and 1973, most of the actors from Star Trek were reassembled to make an animated version of the show. Season One had 16 episodes and Season Two had a further 6.

This was between the finishing of the original series (1969) and the making of the first movie (1979).

I had seen bits and pieces of the series over the years but when it appeared on Netflix I decided to watch all of the episodes.

Well I find this very hard to believe, but there is hardly a single episode in the whole series which has even the slightest merit.

IMDB rates the episodes between 6.1 and 7.4, with the single exception of the second episode, “Yesteryear”, which has a rating of 8.2.

This episode was written by D.C.Fontana and features time travel and “The Guardian of Forever”. The episode also sees Mark Lenard reprising his role from the original series as Sarek (the only time he did so in the animated series).

Here is a still from the episode showing Kirk and Spock: 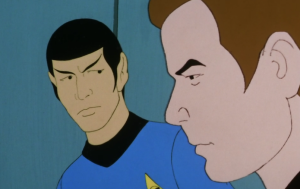 New for fans of Star Trek

In this post I talk about a number of updates for fans of Star Trek.

The first relates to “Star Trek Continues” I which I mentioned previously.  That series is now up to 8 episodes! The most recent episode (“Still Treads the Shadow”) provided an interesting acting challenge for Vic Mignogna who plays Kirk.

The second relates to the upcoming office Star Trek show: Star Trek Discovery. While I wouldn’t normally have much excitement about this kind of show (I don’t think I watched a single episode of Star Trek:Enterprise) I am excited to see that the fabulous Michelle Yeoh has joined the cast and appears in the new trailer:

The show will be released in the Autumn and will be available on Netflix the day after it premiers in the USA.

The third is about a new spoof show called ” The Orville” which will was created by and will star creator Seth MacFarlane, and will be directed by Jon Favreau.

While the trailer is far from hilarious, it does look promising.