Last week was a tough week for the clowns to the east and west of us here in Ireland.

The evil clown to the east, BoJo, was told by the Supreme Count that he had acted “unlawfully” in trying to suspend parliament for 5 weeks. This was a unamimous judgement by all 11 judges.

The evil clown to the west, DonDon, was told that an impeachment inquiry has (finally!) been launched against him. Of all of the things which could have lead to such an inquiry, the one which finally did is in relation  to his dealing with Ukraine.

A tough week indeed for evil clowns, but a great week for people like me who hate them!

There are lyrics in a song which was released by a group called “Stealers Wheel” in 1972 which sums up the way Irish people are feeling at the moment:

Clowns to the left of me, jokers to the right,
Here I am, stuck in the middle with you

And here is a picture of the clowns and jokers in question:

The man on the left is definitely a clown. He even has a clown’s name: “BoJo”.

BTW: Stealers Wheel was formed by the genius who went on to record one of the best songs of all time. 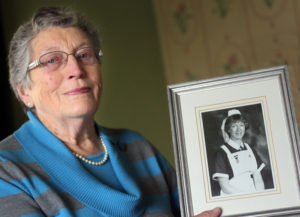 On 8 November 1987 the Provisional IRA detonated a bomb during the Remembrance Day parade in Enniskillen.

Local man Gordon Wilson found himself buried in rubble after the blast. He was holding the hand of his twenty year old Daughter, Marie.

In the video below, you can see an interview which Gordon did with the BBC about these minutes. Even after all of these years, it is extraordinarily moving.

Marie died later in the hospital from her injuries. She was a young nurse with her whole life ahead of her.

What sets Gordon apart from other men is some of the other sentiments he expressed, not shown in this video:

But I bear no ill will. I bear no grudge. Dirty sort of talk is not going to bring her back to life. She was a great wee lassie. She loved her profession. She was a pet. She’s dead. She’s in heaven and we shall meet again. I will pray for these men tonight and every night.

Gordon went on to be a peace campaigner for the rest of his life. He wrote a book about his daughter entitled “Marie: Story from Enniskillen” in 1990. He was a member of Seanad Éireann from 1993 to 1995. He passed away in 1997.

When that day started in 1987 Gordon Wilson seemed like an ordinary man. He was a draper with a wife and three children, and just a few years older than I am now. The events of that day and the remainder of his life showed that nothing could be further from the truth.

In 1996 Alf McGreary (who wrote the book on Marie with Gordon) wrote a biography of Gorden entitled “Gordon Wilson: An Ordinary hero”. I think that is an excellent title.

I have never forgotten the things which Gordon said. I think that the things the he said and did were a turning point in The Troubles.

Eleven people died that day, including three married couples. A twelfth died after spending 13 years in a coma.

Some of us imagined that we would never see another atrocity like that again, especially after the way Gordon spoke and the public reaction to what he said. But on 15 August 1998 (after the Good Friday Agreement) a group calling themselves the Real Irish Republican Army set off a bomb in Omagh killing 29 people, including a pregnant woman. This was the worst single bombing of the Troubles, in terms of civilian lives lost. But it also one of the last, and the last to claim multiple victims.

On the 9th of January 2017 the Northern Ireland Assembly was suspended. That means that there has been no local government in Northern Ireland for over 2 years. This is a disgraceful betrayal of the Good Friday Agreement.

In an attempt, I assume, to put pressure on those involved to restore the local government, an announcement was made in September of last year that the £49,500 salaries of Northern Ireland Assembly members was to be cut by almost £14,000, starting with a £7,425 reduction in November and a further £6,187 cut three months later.

But there was no movement.

The major low point of the strife caused by the political vacuum was when journalist Lyra McKee was shot dead on 18 April 2019 while observing rioting in the Creggan area of Derry. A completely senseless waste of a young life.

Lyra’s funeral was attended by politicians from North and South.

Catholic priest Father Martin Magill received a standing ovation at the funeral service when he said the following: “”Why in God’s name does it take the death of a 29-year-old woman with her whole life in front of her to get to this point?”

I guess the more naive among is thought that things might start to move at this point. But they did not.

So the latest thing to happen in the absence of local government in NI is that the UK Government has decided to bring NI into line with the rest of the UK in terms of laws relating to both abortion and same sex marriage. The deadline to get the assembly and executive up and running again is October 21st.

Experts like Susan McKay tell us that this won’t happen, so it looks as if the new laws will come into effect in the new year. So for me this is the “silver lining” in the shameful fact that the assembly has been out of action for 2.5 years.

Lyra had wanted to marry her partner, Sara Canning. Sara describes it as “bittersweet” that same sex marriage seems to be coming to NI but Lyra won’t be there to see it.

Here is a video of Lyra speaking very eloquently in 2017 about LGBT issues:

But last year Pat Kenny had a series of radio programmes on to mark the twentieth anniversary.

I happened to be out in the car for some reason and heard one of them.

It was very good and very moving.

The part I remember most was the interview with Monica McWilliams.

In 1996, Monica co-founded the Northern Ireland Women’s Coalition political party and was elected as a delegate at the Multi-Party Peace Negotiations.

She was present at the announcement of the Good Friday agreement and she describes that in a very vivid and moving manner.

The whole recording is available here and her part starts at about 13 mins into the recording.

This photo was taken when some of the main players in the Good Friday agreement assembled last year to mark the anniversary. Monica is on the left in the front row. My personal hero, John Hume, was unfortunately too ill to attend. 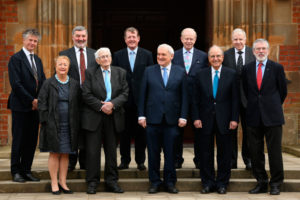 I think everyone is pretty glad to see the back of 2016.

This was the year when we lost David Bowie, Alan Rickman and Glenn Frey at the start, Prince in the middle, and Leonard Cohen towards the end, and George Michael (on Christmas Day no less) and Carrie Fisher at the end. Along with many, many, others.

And incredible to see Carrie Fisher’s mother, Debbie Reynolds, pass away the day after she did.

Civil War continues in Syria with reports that 450K Syrians have been killed in the fighting and almost 3 million refugees have fled the country.

Terrorist attacks linked to ISIL have continued throughout the year. The first in January in Libya claimed 60 lives. The last in December in Germany claimed 12. There were multiple attacks in Germany, France, Belgium and the USA. The worst incident was in Iraq with over 300 killed. Over 1,400 died in total.

From Ireland’s perspective, there were unfortunate public votes from our nearest neighbours on either side. In a June referendum the UK decided to leave the EU (well, to be more specific, England and Wales did and Scotland and Northern Ireland seem to have no choice but to go along with them). Among many other possible implications, this raises the possibility of a border being re-instituted between the Republic of Ireland and Northern Ireland. And in November, the citizens of the USA decided that Donald Trump would be their next president. The impact of this decision on Ireland and the rest of the world remains to be seen. He will take up the office on the 20th.