In 1977 a movie was released which changed movie-making forever. That movie was Star Wars.

Star Wars is one of my favourite movies of all time. I would have been 15 at the time I first saw it. I loved it so much that I went back to the cinema a few days later with a cassette recorded hidden under my coat so that I could record the audio for the entire movie! I still had that recording until a few years ago!

The genius behind the movie was George Lucas.  He was the writer, director and exec producer.

The movie scores 8.7 on IMDB and many movie-makers have paid tribute to it as the movie which made them want to make movies.

In 1980, Lucas released the next episode and it has a slightly higher score on IMDB. Many fans say that it is their favourite of the series.

The third movie was released in 1983 and has a lower score, thanks (in my opinion) to the introduction of the cuddly but annoying Ewoks. But Lucas had released the first Indiana Jones movie by this time and his fame (and fortune!) were assured.

If we ignore TV (and there seem to have been quite a few things about Ewoks in the intervening years!), Lucas returned with Episode I in 1999. This movie introduced the first computer generated character: Jar Jar Binks. Like many fans, I HATED the Jar Jar character. People felt that (like Ewoks) he had been introduced to appeal to young children. Lucas reacted to the fans’ hatred by reducing Jar Jar’s role in Episode II. In Episode III he only had a few scenes and no dialogue.

In October 2015, a Reddit user by the name of “Lumpawarroo” published a theory that Jar Jar was actually a Sith. I am including a video below which beautifully presents the evidence that this is in fact the case.

This is mind-blowing genius! It turns Episode I on its head. It dramatically changes the story arc for episodes I-III.

But unfortunately Lucas chicken out for some reason, introduced Count Dooku, and sidelined Jar Jar.

Such a pity. You are left to imagine the fabulous scene where Jar Jar’s true nature is revealed and he gets to fight with Yoda. How fantastic would that have been!

Speaking of terrorist attacks (as I was in my last post) I watched the move Patriots Day very recently. It stars Mark Wahlberg and covers the bombing of the Boston marathon on April 15, 2013 , when three innocent people were killed, including an eight year old boy. Hundreds of people were injured, including 16 who lost limbs.

Although based on the events of the day, and the few subsequent days, it is obviously not a documentary. And even though you know what happened, it does make compelling viewing.

One of the things which comes across very strongly in the movie is the unified way the people of the city reacted to the atrocity. The phrase “Boston Strong” began to be used, and almost immediately became a popular hashtag on Twitter. For me this reaffirms what I was saying in the last post: if the intention of these attacks is to frighten people and weaken their resolve, then it actually seems to have the opposite effect.

There seem to be a number of differences between this attack and the recent ones in the UK:

Three days after the attack, the brothers killed a MIT policeman, and the elder brother was killed, having been shot several times by policeman and (incredibly) run over by his brother.

I would like to blog about my usual trivial topics, but I cannot in good conscience do so with addressing the terrorist atrocities which have taken place in the UK:

Like right-thinking people everywhere, I was sickened and saddened by these depraved acts. I can’t even imagine the impact on the people who were injured, and the friends and families of those killed and injured.

While all three attacks are contemptible, the Manchester one is the most shocking because of the huge number of people who were killed and injured and the age profile of those people.

The Manchester attacker (I have no intention of naming any of these sick individuals) decided, using some kind of warped thinking, that there was some justification for attacking a pop concert which would be attended by children and young people, and by their parents. And indeed the dead included ten people under 20, the youngest an eight-year-old girl.

There are two very specific elements which mystify me about all of this:

To my way of thinking, these acts are not just horrific, they are also senseless.

Here is a picture from the Mirror newspaper of the 22 ordinary, innocent people killed in the Manchester attack. My heart goes out to their families and friends, and all of those who were affected by the attack. 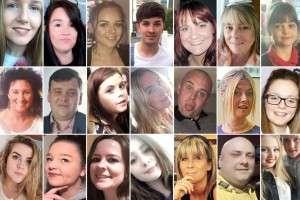