Star Trek Continues – but not for much longer

Episode 10 of “Star Trek Continues” is available on the website.

It is the penultimate episode. The last one will be released in a few days – on the 13th of November.

It is very good.

I saw an interview with Vic Mignogna where he said that he thought the fans would be happy with the way the show ends (although fans like me will not be happy that the show has to end so soon!) The second last episode has the highest score on IMDB so far : 9.5 (the previous highest was 9.0).

There is a moment in the show which is astonishing though. So astonishing that I had to pause the video to check what I was seeing.

I mentioned in a recent post how a young Sean Young appeared in BR2049. But that was not astonishing as they had some much money available to achieve the effect.

What astonished me was that the Romulan Commander looked uncannily like the actress from the original series (in the episode “The Enterprise Incident”).

A little bit of research (thanks IMDB) told me that the new actress is Amy Rydell. The previous actress was Joanne Linville. The latter is the real life mother of the former.

What a stroke of genius! I am so impressed!

Here are photos of the two ladies side by side: Joanne is on the left, Amy on the right. 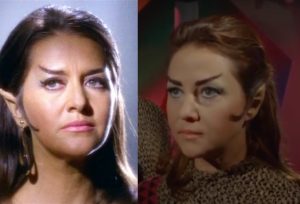 I am very much looking forward to the last episode.