When I joined the IT Department (which was called the “Systems Department” in those days) the staff from both Life and General Insurance were located together, in Pembroke Road in Ballsbridge.

From the outset I worked on the Life side of the business, and when the Life company moved out to Blackrock (which the General Manager told us at the time was the “Ballsbridge of the future”) I went with them.

Initially we had an IBM System/34 but we moved over to Wang systems subsequently. Over time I began to focus more and more on PCs, as these became an increasingly important part of our business.

Shield was acquired by Eagle Star after I left and subsequently became Zurich which it is today.

It is hard to find even the logo of Shield or Shield Life on the internet today.  So here are a few items which I have photographed for posterity.

The first is a header from a letter which I received in 1989. Note that there was a fax and telex number, and that the phone number had only six digits!

The second is a footer form a payslip I received in the same year. Notice the sprocket holes on the left which were required to feed the paper through the printer.

The third is a golf accessory I got at some stage while I was working with the company (golf was a big deal both within the company and with the broker community). 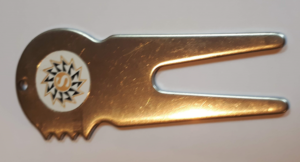 I had a great time in Shield and I made a lot of great friends who are still friends today.

I intend to do some posts about the projects I worked on in Shield over the coming days and weeks.

I mentioned in my old blog that my first job was in a company called “Computime” which was a “Computer Bureau”.

The company was located at 20 Upper Mount Street in Dublin. I worked there for two years starting in June 1979.

The company was founded and run by Kevin Gallagher.

I joined the company as an “Operator”, meaning that I managed the computer and ran the various batch jobs which our customers required.

Later I became a Programmer. I intend to write about some of the projects I worked on over the coming days/weeks.

The company was staffed as follows:

The computer room was in the basement. The computers were delivered through the basement window. There was a door from the basement to a small outside space. If you were walking along Upper Mount Street while the printer was going, then you could hear the clatter from the street.

I learned a lot in Computime, and I made some great friends, some of whom are close friends to this day.

There is very, very little information about the company on the internet. The Companies Registration Office has records of when the company was registered (1969) and when it was finally dissolved (1995).

There is mention of the company and the founder here: https://techarchives.irish/minicomputer-systems-and-software-1969-82/robert-poynton/

I still have two letters from Computime which are on the company’s headed paper. The first is my job offer. The second is a written reference.

In an effort to have some kind of visual record of the company’s existence, here is the header from the first of these letters. Note that this document dates back to the time when Dublin phone numbers had 6 digits!