Blade Runner – Is Deckard a Replicant

At some point during the making of Blade Runner, Ridley Scott decided that it would be brilliant if Harrison Ford’s character were a replicant.

Some kind of irony, I suppose, that Deckard was retiring replicants but was a replicant himself without even knowing it.

So he added the unicorn scene in the Director’s Cut so that we could all be let in on the joke.

And then Hampton Fancher, Michael Green, Denis Villeneuve, Harrison Ford and Scott himself became involved in making a sequel. So they had to face this question. Obviously Ford was going to look a lot older in the sequel. So what would that mean?

So the decision they made was to leave the question just as open as it was at the end of the first movie.

But for me (as for Harrison Ford) Deckard was always human. And the unicorn scene was a mistake.

The reason I think Deckard was human was because he was clearly no match for the replicants in combat. He was lucky to survive each encounter with a replicant. He only survived the final encounter with Batty because the latter allowed him to. And he felt pain, as the fight with Batty so clearly illustrated.

And the reason I thought that Deckard  should have been human was that he represents us. In his encounters with Rachel. In his encounters with Batty. The movie only makes sense if he is a human experiencing those emotions. Feeling empathy for Batty. Falling in love with Rachel. And Batty chooses to let him live. Not because Deckard is another replicant. But because Deckard is human. When he says “I’ve seen this you people wouldn’t believe” he is referring to “you humans”, in my opinion.

So Ford is right, and Scott is wrong.

And Fancher and Villeneuve (presumably out of respect for Scott) decided not to set the record straight.

Here is the great “Tears in Rain” scene from the original movie.

So as I mentioned in my last post, I went to see Blade Runner 2049 on the opening night. This posting contains SPOILERS.

It is hard, of course, for a sequel to live up to a classic (the 1982 movie has a score of 8.2 on IMDB and 90% on Rotten Tomatoes). I know (from interviews on YouTube) that Denis Villeneuve was very conscious of this. But he had Hampton Fancher on to write the story, and Ridley Scott on board as Exec Producer, and Harrison Ford on to reprise his role, so he went for it.

The movie has a score of 8.5 on IMDB and 88% on Rotten Tomatoes. So they did a lot that was right.

The thing I liked most about the new movie was (of course) the way it looked. They did an amazing job.

The things I liked least were:

The thing which surprised me most was when the young Sean Young made an appearance! I’ll need to watch that again because I was so busy trying to figure out how they did it (and noticing what looked like bad CGI) that I wasn’t paying proper attention to what went on.

One thing I would suggest which would have made the movie better, IMHO, would be to have asked Vangelis to do the soundtrack. They brought everyone else back, why not him! It was particularly obvious to me when they brought some of his music in towards the end.

So overall (like the majority of fans I think) I was very happy with the sequel. It is a good movie and picks up lots of threads from the original. 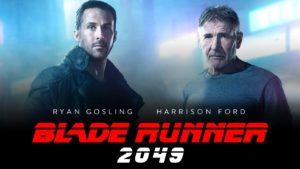 There has been lots of publicity recently for the upcoming Blade Runner sequel.

Warner Bros have released a series of trailers, TV spots, shorts and featurettes. And the director and cast are appearing everywhere, notably:

Reviews seem to be generally positive. The Guardian calls it “a gigantic spectacle of pure hallucinatory craziness“. Rotten Tomatoes seems to have 47 reviews and is currently scoring the movie at 96%.

The movies opens this Thursday and I have bought my tickets for my local cinema. Interestingly: 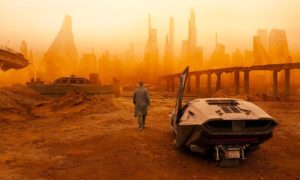 Star Trek Discovery – the wait is over

So the first two episodes of Star Trek Discovery are available on Netflix. I watched them earlier this week.

There had been a lot of negative commentary about the series before it aired so my expectations were low.

Mark Zicree (Mr. Sci-Fi), for example, had a YouTube video called “Klingons are dull”  which spoke about problems on the show and speculated that a decision had already been taken that there would only be a single series. It also (as the title indicates) talked about the fact that the Klingons are not the most interested subject (a sentiment I echo – I had no interested whatsoever in TNG episodes that focused on Worf or the Klingons).

So having seen the first two episodes I can say that low expectations were justified.

The things I disliked most – in additional to there being too much about the Klingons of course – were (spoilers ahead):

Further to these last three points: I remember how Gene Roddenberry hired scientific advisers in the original series to help to make sure that what they were saying and showing had at least some basis in science. It is clear that no scientific advisors have been hired on the new show.

I have watched some videos where people (including Mr. Sci-Fi) review the two episodes. Marc Zicree, made the following observations:

Observations by other reviewers include:

So I am planning to watch some more episodes (there will only be 15 after all apparently) but I am not expecting much.