OK. So the title of this post is misleading.

There is nothing I hate about HIMYM! I love that show. I just finished watching all 9 seasons.

If you asked most people what they hate about HIMYM, they would say the ending. On IMDB the series has a rating of 8.3 but the final episode has a rating of 5.5, which is by far the lowest rating of the whole series.

I don’t hate the ending really, but if I was forced to criticise something about the show I would have to say:

Since the premise of the story is that Ted is telling his kids how he met their mother, it is reasonable to assume that she might not be alive at that stage.

Having dealt with the bad, let me list my favourite things:

Barney is a fabulous character. I had watched a few episodes because my son was watching the show, and I think that Barney was (more than anything else) the thing that made me want to watch the show. He was so cool. He was (and there’s no way to avoid saying this) “legen … wait for it … dary!”

The device of having Ted telling the story to his kids gave the series a fabulous potential (which the writer exploited to the fullest) of time travel.

One example is that he was able to tell them that various girlfriends were NOT their mother. But he was also able to tell stories of near-misses with the mother, stuff about the umbrella, etc. It was great.

Another were the Rashomon elements in the story telling. In “Ted Mosby: Architect”, for example, Robin and Lily are hearing stories from various people of Ted seeming to act out of character.

Another was shown in “The Burning Beekeeper” where the same story is told again and again with different people filling in blanks from their perspectives.

Another was in the episode called “Dowisetrepla” where Marshall and Lily were shown saying this before Ted would say “is what he/she should have said” before showing what they actually said.

And then there was “We’re Not from Here” where Marshall and Lily write letters to each other to be opened upon the person’s death. But we jump far into the future to see one of them being opened.

And to further emphasise the time travel theme:

All in all, the time travel was one of the cleverest, funniest and most novel things on the show.

I don’t think there was an episode where I didn’t laugh out loud at some stage.

One of the funniest jokes, I think, was in “The Magician’s Code”. Lily was in hospital and in labour with Ted and Robin in the room when the following exchange happened:

In conclusion, HIMYM is a great series. I may even watch it again! 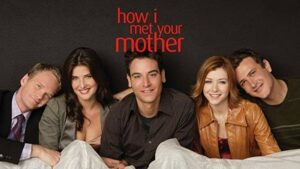 I guess some people realised that it might be possible to get big stars to do things using ZOOM during COVID which might have been difficult or impossible to get done during normal times.

And in so doing, to raise money for charity.

One such person was Josh Gad. He created a series of videos where he reunited the cast and crew of great movies such as The Goonies, Back to the Future, Splash, Lord of the Rings, Ghostbusters and Ferris Bueller’s Day Off.

Josh is a great host and his enthusiasm makes the shows a joy. I know most of the participants are actors but they seem to get genuine pleasure out of being reunited.

Here is my favourite of them:

Music and COVID and The Late Late Show

The Late Late Show did a great job during the early months of COVID. They educated and had a great focus on the front-line workers.

They also had lots of great musical guests and collected a huge amount of money for various charities.

Much credit to Ryan Tubridy and his team, and to Miriam O’Callaghan who stepped in when Ryan was hit with the virus.

Here are links to some of the great musical performances:

Dermot Kennedy – All My Friends

Sinéad O’Connor – Thank You For Hearing Me

But the one that really blew my away was the appearance by Gavin James. I love his song “Always” and I didn’t realise that he was Irish!! He’s a superstar!

Some nice things happened in relation to music over the period of the COVID lockdowns.

The first thing I remember was seeing people in Italy singing and playing instruments from their balconies.

Then people began to get creative about what could be done from home using technologies such as Zoom.

An early one was “True Colors – Camden Voices (self-isolation/virtual choir cover” from March.

In June we got “No Frontiers | Mary Black and Friends in aid of Women’s Aid Ireland“.

But then came the most fabulous one of all.  I simply do not tire of listening to (and watching) “Irish Women In Harmony – Dreams”. Congratulations to RuthAnne who started the initiative, and to all of the women who participated. and it’s all in aid of Safe Ireland, who support domestic abuse victims and survivors.