Dublin engineer and draughtsman Cyril Fry built a superb collection of more than 300 model trains over a 40 year period from the 1920s. Cyril passed away on 1972 and the collection was subsequently acquired from his widow by Dublin Tourism.

The collection reappeared in 1988 in Malahide Castle. A team lead by retired CIÉ craftsman Thomas (Tom) Tighe had spent 8 years constructing a fabulous O gauge display to complement Cyril Fry’s models which were displayed in static exhibits for their own protection and preservation. The model railway had stations from all over Ireland, including Malahide station. So people (like me) going to see the Fry Model Railway were able to see and admire both of these things in Malahide Castle. The model railway was dismantled in 2010 and  put into storage.

I mentioned in a previous blog that I was excited to hear that a local farmer, Micheál Gaffney (sometime referred to as Patrick Michael Gaffney) who passed away in 2012, had left €1.5M in his will to Fingal County Council for the renovation of Casino House provided it was used to house the Fry Model Railway. The House was built around 1750 by the Talbot family. What a fantastic idea that was – to reserve the model railway and the cottage and to keep them available for visitors to Malahide.

So the new exhibition (called the Model Railway Museum) finally opened in January of this year, I did not manage to get in to see if before it was closed for COVID, but I did get in to see it with my whole family last weekend. Here is where the bad news begins.

The lady who welcomed us realised that we had seen the railway in its old location. So she started to set our expectations by saying that:

So the bad news is:

I think small kids who like trains would still enjoy the model. But for the rest of us I would have preferred to have parts of Tom Tighe’s model, even if there were no moving trains.

So if you’re thinking of visiting because you have small kids then you may enjoy it. But everyone else can save their money.

Apparently Fingal County Council invested a further €2.8 million into the project on top of Mr Gaffney’s contribution. How badly wasted that money was!

To be honest, I can’t help thinking that Mr Gaffney is rolling over in his grave to see what Fingal did with his money.

If you have an interest in the Fry Model Railway, then I suggest that you should instead watch this segment from RTE’s Late Late show (originally shown on 31 March 1989) where Gay Byrne interviews Tom Tighe and shows some footage of the model railway in Malahide Castle.

Ireland lost one of its greatest this week, with the passing of John Hume on Monday, and his funeral on Wednesday.

I always held John in the highest regard. And I was not the only one. He was voted “Ireland’s Greatest” in a public poll run by RTE in 2010.

Many tributes were paid to John (and his wife, Pat) over the last week. During the funeral itself, messages were read out from Pope Francis, the Dalai Lama, Bill Clinton and Bono. Many have said that without John’s vision, courage and perseverance that Northern Ireland would not have achieved peace in the way that it did. People have talked over the last few days of the number of lives which John has saved.  He has been called Ireland’s Martin Luther King.

He was awarded many richly deserved honours during his life, including:

We were on holiday in Moville for a week, leaving for home on the day he died.  On the Saturday we went into Derry city and went on the Bogside History Tour, guided by  Paul Doherty whose father was killed by British soldiers during Bloody Sunday in 1972.

The tour was excellent, and we all learned a lot over the course of those two hours. Obviously John Hume was mentioned a number of times, including the fact that he had advised against the march on Bloody Sunday because he was afraid of what the soldiers were going to do.

There are so many great stories of what this “shy schoolteacher” (as his wife Pat described him) did and achieved in his life.  There is a story here, for example, of how John called around to the families of the victims of Bloody Sunday and gave money to held with funeral expenses.

I am sorry that we were not still in Moville on the evening of his removal to the church. If we had been we could have stood on the roadside to pay our respects to him and his family. But we were home and we had to content ourselves with lighting a candle in the window instead.

There are so many photos that I could finish this with, including photos of John with the great and the good. But I think the most fitting is this photo of John and his wife Pat on the day of voting for the Good Friday agreement. Ar dheist Dé go raibh a anam. 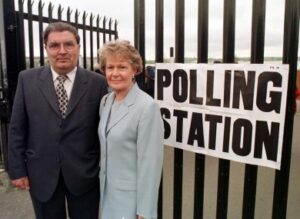