I mentioned in my last post that I have been disappointed by movie sequels before.

Franchises like Star Wars and Terminator come to mind right away.

The Matrix already had two disappointing sequels back in 2003. The original movie has an IMDB score of  8.7 while the sequels dropped to 7.2 and 6.8 in that order.

But I couldn’t avoid a little excitement when I heard that a new sequel was coming in 2021 and that one of the two directors was involved along with Keanu Reeves and Carrie-Anne Moss (back from the dead somehow?) Perhaps Lana Wachowski could make amends for past mistakes?

Well nothing could be further from the truth – this movie is a complete disaster.  The IMDB rating has dropped to 5.7.

Here are the worst things that I can remember:

I mentioned in my last post that Scott Adkins must be busy with other things as he hasn’t made any “Art of Action” videos recently.

Well IMDB tells me that he has released seven (!) movies since he released Ip Man 4 in 2019.

And that he has another five in some stage production.

The most recent movie of his which I saw was “One Shot”.  I really enjoyed it. It has a decent story, loads of action, and it looks as if it was all filmed in “one shot”. Quite an achievement!

The other exciting news for Scott Adkins fans like myself is that he has a role in “John Wick: Chapter 4” along with Donnie Yen.

Now I have experienced a lot of disappointment over the years with looking forward to sequels. But I am hoping that this one will work out, given the quality of chapters 1-3.

I mentioned previously that Scott Adkins had done 21 episodes of his excellent “Art of Action” series on YouTube.

I mentioned hoping that he would do people like Jackie Chan, Jet Li, Chuck Norris and Keanu Reeves.

Well he hasn’t (so far) but here are the people he has added since my last post:

This last one was 7 months ago so I guess Scott is busy with other things.

The one thing that impresses me about these people is how nice and how humble they all seem to be. It’s a pleasure to listen to them.

I hope he will make many more, when time permits

It’s hard to believe that it is 50 years today since the British army opened fire on innocent people in Derry city, killing 13 on the day and 1 some weeks later. Six of those men were only 17 years of age.

And in the intervening 50 years there have been two inquiries and even an apology from the British Prime Minister but not a single soldier has been jailed for those killings.

The families of the victims still demand justice.

When we were on holiday in Donegal a few years ago we joined the Bloody Sunday walking tour.  It was very good good and helped us to understand the events of the day and the repercussions. I took the photo below of one of the murals.

I know it has been 50 years but I still hope that the perpetrators of these killings will be bought to justice one day. 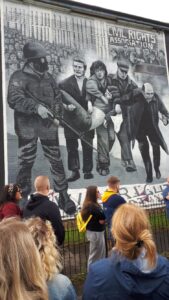 While I have been neglecting my blog, others have not.

I see that one of my posts (Predestination) has garnered over 64,000 comments!

I can’t check all of them, of course, but I’m pretty sure they are all spam.

Some of my posts permit comments, while others do not. I’m not sure why, TBH.

Now I could do a series of “Move to Bin” operations but that would take forever to do by hand. So I did it from the database using this:

DELETE FROM `wp_comments` where `comment_post_ID` = 84

I could have done something with the wp_commentmeta table too but there were only a small number of rows there so I didn’t bother.

I can’t believe that the last post I added here was in October of 2020.

I can’t understand it, so I can’t explain it!

I thought blogging was one of the things that people were doing more of during the pandemic!

Not me for some reason. I’m back now though. Onwards and upwards.

You can see him on his YouTube channel, and you can listen to his “Conan O’Brien Needs a Friend” podcast.

One of the things I enjoy most about his podcasts is how often he mentions that he is Irish. I think it’s in pretty much every episode!

And just to prove how Irish he is, you can watch an absolutely hilarious visit he made to the Guinness Brewery in Dublin.

His reaction to being told that there are “six steps to pouring a glass on Guinness” is worth the price of admission on its own!

In my last post I mentioned how I am enjoying some of the things which people are doing on YouTube to keep us entertained during COVID.

One of the most enjoyable of these is the series of interviews which Rob Brydon has been doing.

He has completed “Series 1” which included interviews with people like Stephen Merchant, Mattnew Rhys, Will Ferrell and more. He also talked to fellow starts of Gavin and Stacy like Ruth Jones and Alison Steadman.

Rob is a very funny man and these interviews are full of warmth and humour. Here is a link to his YouTube channel.

Series 2 has just kicked off with Matt Lucas.

Scott Adkins – The Art of Action

I have been an admirer of Scott Adkins for some time now. He’s a great martial artist, and has made some great movies (63 at present according to IMDB) – many of which are available to see on Netflix!

He had made movies with Jackie Chan, Donnie Yen, Tony Jaa, Iko Uwais, Michael Jai White and many others. He was even in an X-Men movie and appeared on UK TV in Holby City and Eastenders!

He is currently doing a series of interviews on YouTube with other martial arts stars. He releases about one a week. I don’t know if he is doing this because of COVID, but it certainly gives us something to look forward to every week.

He has interviewed many greats of the past, including Cynthia Rothrock, Benny Urquidez, Richard Norton, Jeff Speakman, Steven Seagal, Phillip Rhee, Loren Avedon, Dolph Lundgren and more (I should add that some of these are still making movies).

He has interviewed many current stars such as Michael Jai White, Tony Jaa, Mark Dacascos, and more.

He has interviewed many great action directors such as Gareth Evans and Chad Stahelski.

He has interviewed people I did not really know anything about such as Kane Kosugi, Marko Zaror, Daniel Bernhardt, JJ Perry, Andy Cheng, Vidyut Jammwal, Sam Hargrave and more. These are people I need to learn more about!

The interviews themselves are great, mainly I think because Scott is so enthusiastic and so modest. He clearly likes most or all of them and shows them great respect. He manages to get the best out of all of them.

I cannot wait to see whom he interviews next. I think his 608K subscribers are (like me) hoping for people like Jackie Chan, Jet Li, Chuck Norris and Keanu Reeves!

Here is his most recent (21st) interview:

I have just finished re-reading Shibumi (my favourite book) for the umpteenth time.  Still a great pleasure.

And now I have started to re-read Don Winslow’s book about Nicholai Hel called Satori.

This is my first time re-reading this since it came out in 2011.

I was very excited to read it at the time. A new story about Nicholai Hel (and some familiar characters from the original book). And an endorsement from Rodney Whitaker’s daughter Alexandra on the Trevanian website.

At the time I didn’t enjoy it to be honest. I didn’t recognise Winslow’s Hel to be the same person as Whitaker’s. I note that Whitaker had two conditions for the idea of another author writing about Hel:

Anyway, I’m not that far into the book but I spotted a glaring error on the second page!

Winslow says that Hel killed his father-figure Kishikawa with “a single finger-thrust to the trachea”. Anyone who read Shibumi know that he killed him with a pencil (naked/kill is not about killing with no weapon, it’s about being able to use anything as a weapon).

How could anyone make such a mistake about a well known detail, and then hope to re-create the character of Hel?!

Anyway, I am reading the book and (in spite of what I have said above) trying to do so with an open mind.

By the way, while I’m writing about Trevanian once again, I should mention the sad update that: