I think everyone is pretty glad to see the back of 2016.

This was the year when we lost David Bowie, Alan Rickman and Glenn Frey at the start, Prince in the middle, and Leonard Cohen towards the end, and George Michael (on Christmas Day no less) and Carrie Fisher at the end. Along with many, many, others.

And incredible to see Carrie Fisher’s mother, Debbie Reynolds, pass away the day after she did.

Civil War continues in Syria with reports that 450K Syrians have been killed in the fighting and almost 3 million refugees have fled the country.

Terrorist attacks linked to ISIL have continued throughout the year. The first in January in Libya claimed 60 lives. The last in December in Germany claimed 12. There were multiple attacks in Germany, France, Belgium and the USA. The worst incident was in Iraq with over 300 killed. Over 1,400 died in total.

From Ireland’s perspective, there were unfortunate public votes from our nearest neighbours on either side. In a June referendum the UK decided to leave the EU (well, to be more specific, England and Wales did and Scotland and Northern Ireland seem to have no choice but to go along with them). Among many other possible implications, this raises the possibility of a border being re-instituted between the Republic of Ireland and Northern Ireland. And in November, the citizens of the USA decided that Donald Trump would be their next president. The impact of this decision on Ireland and the rest of the world remains to be seen. He will take up the office on the 20th.

Songs about the 1916 Rising

I want to mention two beautiful songs which commemorate the 1916 rising.

The first is “Grace”. This version is performed by The Dubliners”.

The song remembers Grace Gifford who married Joseph Plunkett in Kilmainham Goal a few hours before he was executed. I learned on the walking tour a few weeks ago that they only had 10 minutes together after the marriage, in a small cell filled with soldiers. More details are available here and here.

This sad and beautiful song has been playing in my head for the last week.

The second is “The Foggy Dew”. This version is by Sinead O’Connor and the Chieftains and is from the latter’s fabulous album “The Long Black Veil”.

Executed Leaders of the 1916 Rising

In my past post I named the 7 men who signed the signed the Proclamation of the Irish Republic and who were executed for their roles in the 1916 rising.

The following men did not sign the Proclamation but were also executed:

All of these men were executed in Kilmainham Gaol with the exception of Thomas Kent (killed in Cork Detention Barracks) and Roger Casement (killed in Pentonville Gaol in London). The picture below shows president Michael D. Higgins laying a wreath in the Stonebreakers’ Yard last Sunday to commemorate the centenary of the Rising. 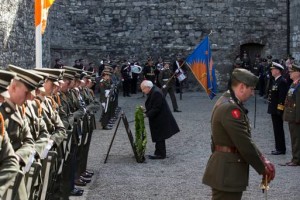 The following is a list of the signatories of the Proclamation of the Irish Republic, read by Padraig Pearse outside the GPO on Easter Monday 1916. All of these men were executed by British firing squad following the Rising.

This is the Proclamation with the 7 signatories: 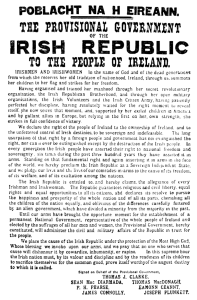 My previous posting on the centenary celebrations for the 1916 Rising may have created the impression that there were no very many people in Dublin to celebrate.

The photo above may help to dispel this possible misaprehension.

The photo below was taken from Westmoreland Street (close to Trinity College) looking towards O’Connell Bridge, where a large screen was positioned. On the screen you can perhaps see the president, Michael D. Higgins. 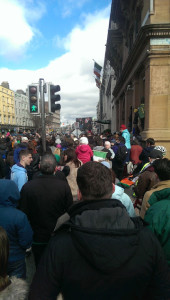 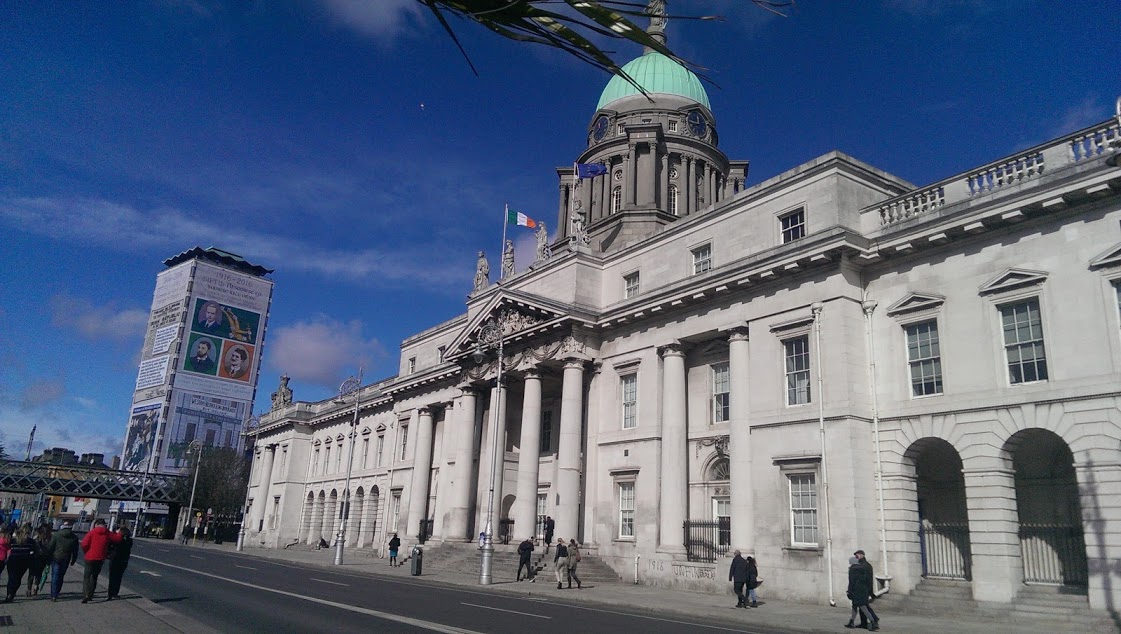 Last weekend was Easter weekend, and the 100 year anniversary of the 1916 rising.

I regard the 1916 leaders as true heroes and I was glad to be able to go into Dublin with my family on both Sunday and Monday to join in the festivities and the celebrate this very special anniversary.

I took the photo above on the way in to the parade on Sunday. In the photo you can see: