Rob Brydon tweeted the following the other day: “Very proud of what Wales have done in this World Cup, in the face of such injury problems. What remarkable heart and courage!”

I couldn’t say it better myself but the surprising things is that I would be talking about the Irish team!

So perhaps there is a common experience for many countries who are knocked out of the competition.

The whole country was so proud of the way the Irish team won all four pool matches, especially the last game against France.

Not only was that the game we need to win to avoid having to play the All Blacks, but we also lost our two superheroes during the game: Paul O’Connell and Jonathan Sexton. It was such a fine performance.

All of which made it very difficult to take the defeat to Argentina yesterday.

The thing about sport is that there are always “what ifs”. We will always wonder how we would have performed against Argentina if O’Connell, Sexton, Peter O’Mahony, Jared Payne, and Sean O’Brien had been playing. But we will never know.

What we do know is:

Here is a photo of O’Connell and Sexton before our hearts were broken: 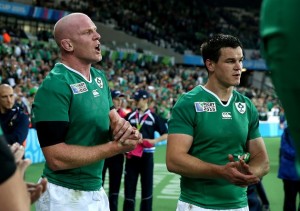