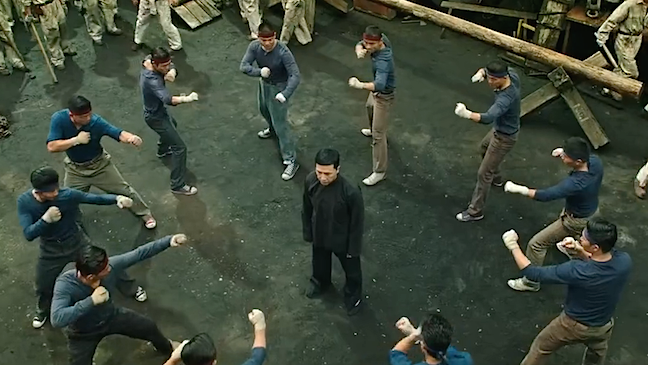 In a recent blog post, I mentioned three movies to which I have been looking forward.

Imagine my surprise, therefore, when I discovered that Ip Man 3 was in cinemas – and I had heard nothing about it!

I went to see it with my brother. In common with other third installments in a movie series, it was available in 3D so we went to see that version.

The movie is once again a collaboration between (the great) Donnie Yen and Wilson Yip. This time the action director is (the great) Yuen Woo-Ping, taking over from Sammo Hung.

It was showing in the Cineworld in Dublin so:

Interestingly, there were little handouts for the movie beside the checkout (see below).

The movie itself is very good. Because it focuses a lot more on the relationship between Ip Man and his wife, quite a lot of it is quite slow-moving. And this is a strange plot about Mike Tyson trying to close a school and Ip Man spending lots of time guarding the school.

But there are lots of great fight sequences. There is the (inevitable) showdown between our hero and Tyson. But the good news is that is just one of the warm-up fights, rather than the climax of the movie.

There is (for example) a good fight between Ip Man and a Thai fighter, which starts in a lift (elevator).

And there is the final fight between Donnie and Zhang Jin (Max Zhang). There are echoes of the outstanding fight between Michelle Yeoh and Ziyi Zhang in Crouching Tiger here, although (on first viewing) I don’t think the fight is nearly as good.

And, of course, there is the appearance of the Bruce Lee character in the movie. I can’t help wondering if Bruce ever rubbed his nose as much as that in real life!

The 3D is also quite good by the way.

Donnie Yen says that this may be his last Ip Man movie and his last martial arts movie. I hope not!

I am looking forward to seeing it again. 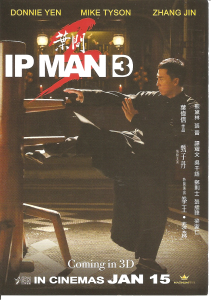 Donnie Yen in “Rogue One: A Star Wars Story”