Let me start by saying that it’s a genius premise for a movie.

No – I don’t mean the idea that you could write about a world where a guy discovers that he’s (almost) the only person to know the songs of The Beatles.

I mean the idea that you could create a movie which really just features a series of Beatles songs one after the other!

I went to see this movie a few weeks ago with the family. We all enjoyed it really, but that was more about the songs than anything else.

I am a long-term fan of Richard Curtis (he was involved with Blackadder, Spitting Image, Four Weddings, Love Actually, About Time, etc. after all) so I was happy to go to see it. Not his best work though.

It does score 7.0 on IMDB though (which unbelievably is the same score as Four Weddings!) The Rotten Tomatoes ratings are probably a better guide being 63% and 89% respectively from critics and audience (Four Weddings got 96% from critics).

Himesh Patel does well in the lead role, and Lily James (although she doesn’t have much to do) really lights up the screen. And hats off to Ed Sheeran for being willing to appear as himself and for having to good humour to say and do the funny things which were asked of him.

Here is a picture of these three (Gareth Cattermole/Getty Images): 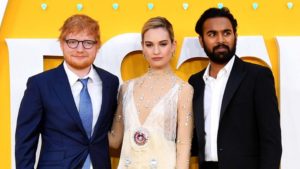