I did a post about STD before.  That was after watching the first two episodes.

I have now watched the first two seasons. And things aren’t much better.

The main problem is still the same: I can see no reason to like the central character, Michael Burnham.

In the first two episodes she had committed mutiny, started a war, and failed to save the life of her captain.

Since then she has fallen in love with a Klingon who has been converted to a human (Ash Tyler – I don’t really know what that is all about) and she seemed to spend most of season two crying for one reason or another.

The series is littered with unsympathetic characters: Burnham, Tyler, Lorca, new Georgiou, Leland, etc. How does any showrunner expect people to like a show where there are so few likeable characters?

But the main glimmer of light was the appearance of Anson Mount, Ethan Peck and Rebecca Romijn and Pike, Spock and Number One respectively. But that is only for another potential spin-off show as there is no reason for them to appear in the next season.

The most interesting episode was the one where they go (for no real credible reason) to Talos IV, linking back to “The Cage” from TOS.

I also recently watched the extra short episodes which are available under “Trailers and More” in Netflix. Nothing of any real merit there either.

Here is a picture of Pike, Spock and Number One: 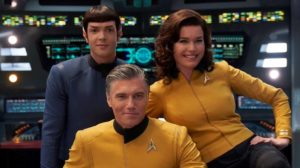